The Bantam Combat System is the same whether you are fighting another player or an Enemy NPC. Players begin each game with 7 starting cards that make up their Combat Deck. They can purchase new weapons and items, and learn new moves to improve their decks. When a fight is initiated, the players shuffle their own decks, draw 4 cards, and play a card from their hand. The card effects are resolved, and the players draw another card from their deck and continue the fight. 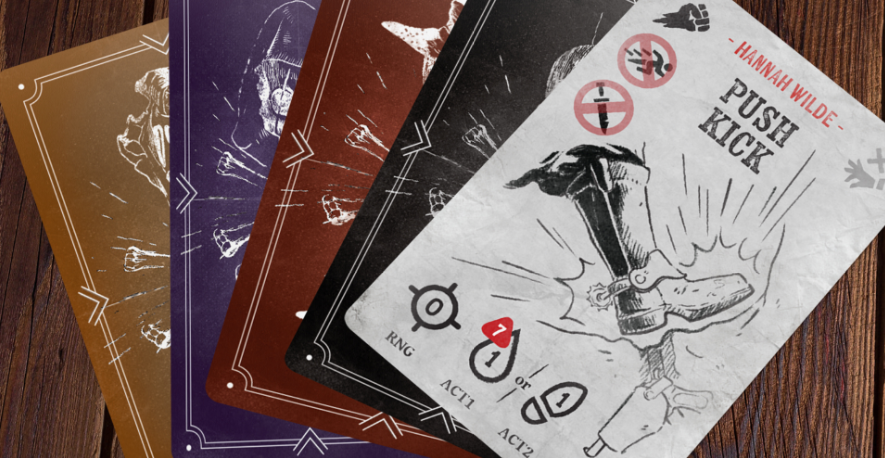 The foundation of the Bantam Combat System is built on a modified rock, paper, scissors mechanic. The 3 basic card types are brawl, block, and tackle. Brawl cancels tackle, tackle cancels block, and block cancels brawl. More card types can be purchased, adding new layers of strategy to the combat.

Most starting cards have a range of zero, which means the effects only apply when both combatants are in the same space (which is called an "Acre"). Once you start to purchase ranged weapons, you can engage other players from further distances and line of sight comes into play. Line of sight is dictated by an Acre's color. If it shares a color with another Acre, then there is a clear line of sight between the two.

In the example above, if a player was on the lime-green and dark-green cliff to the left they could see down into the bandit camp. If they had an M225 Sniper Rifle with a range of 1-3, then they could take a shot at the camp which is 2 Acres away (following the lime-green line of sight). Since Enemy NPCs (the bandit in this case) always move towards the player along the path of least resistance while maintaining line of sight, they would move across the bridge and begin inching their way toward the player. If the player was on the lime-green and blue Acre directly to the left of the bandit camp, the bandits would be forced to scale the cliff in pursuit of the player. If the bandits failed the Agility Check to scale the cliff, they would continue to fall back down into their camp and receive one wound with every failed attempt. However, if the bandits are able to successfully scale the cliff, the player is now in a world of trouble!

I wish you the best of luck in your future engagements. Hopefully, your draw is swift, your dice roll well, and you don't end up getting patched up by Doc Barber in town.

...but even if you do, it's not the end of the world. While other players may be unforgiving, the game is not. As long as you keep your wits about you, you'll find another way.