What Is an Immersive Tabletop Simulator?

You may have heard Bantam West referred to as an "Immersive Tabletop Simulator"...

While Bantam West (link) could be considered an open-world Western adventure game, it offers the players more than that. I coined the term "Immersive Tabletop Simulator" in reference to the video game genre - immersive sim (link). An immersive sim, short for simulation, is a systemic game that emphasizes player choice. Games that fit the genre are typically built on a complex nest of intertwining systems that function autonomously from the player. When the player interacts with these systems, each system responds in unique ways and presents the player with the opportunity to find open-ended solutions. These games offer high levels of player agency. This means players can make their own creative solutions and approaches to achieving their goals.

Some of my favorite immersive sims are Thief, System Shock 2, Deus Ex, and Dishonored. Growing up, I remember playing the same levels over and over just to test out different approaches. Having that level of creative freedom in tackling the various problem sets presented to me felt like a breath of fresh air, especially after playing games like Tomb Raider, Half-Life, Halo, and countless other linear and highly scripted games.

The director of Deus Ex, Warren Spector, had emphasized that the game was, "...designed, from the start, as a game about player expression, not about how clever we were as designers, programmers, artists or storytellers. The game was conceived with the idea that we'd accept players as our collaborators, that we'd put power back in their hands, ask them to make choices, and let them deal with the consequences of those choices" (Postmortem: Ion Storm's Deus Ex - Gamasutra [link]).

My goal with Bantam West is to present the players with a living world that they are free to explore, experiment, and express themselves within. Players begin the game with a myriad of objectives to pursue and no guidance on exactly how they should accomplish those objectives. They are the authors of their own stories each and every time they play the game. The pictures below depict the To-Do List, the Bank Note, and one of 12 unique Pursuit Cards. 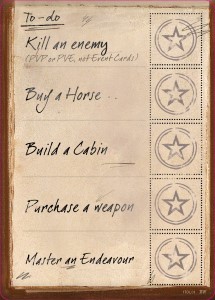 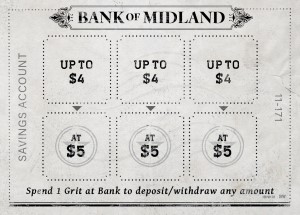 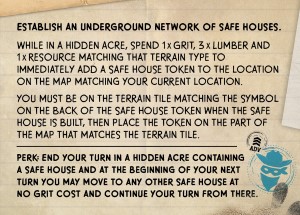 These are just a few examples of the huge amount of options for scoring points in the game, the majority of which are available to the player immediately. From the start, the player is left thinking, "What do I want to do? Should I buy a horse? Build a cabin? Purchase a weapon? Recruit a rider? Master an endeavor?" and the list goes on! While there will be some players who try to min/max the game and its systems to ensure that they win, I find the experience to be the most fulfilling when you choose to live the life that you want to live. Do you want to be a wealthy merchant and avoid a fight at all costs? Do you want to be a ruthless gunslinger with empty pockets and an insatiable thirst for blood? Do you want to slip into the shadows and capitalize on the wealth of others? As you make these choices and shape your character's lifestyle and goals, the world and the other players will react in their own unique way. Throughout the course of a game, a legendary tale will be told and you will find yourself recounting those stories with your friends for weeks after the game has been packed up and put away.

There are some open-world tabletop games that feel like a hand-holding stroll through a predetermined narrative, or a lackluster choice of actions from what to be just a variety of mini-games. This game is not that. Bantam West is an immersive tabletop simulator that grants the player total freedom to play how they want. It is a wild adventure in a box, and your story is just waiting to be told...

Tell your story on July 13th! (Join waitlist below)